Created by the viciousness of British imperialism, and you are still slaves of the Raj/Upwards of 20 billion dollars a year, we know you’re getting paid from the Hajj/And every penny is used to fund oppression/40,000 prisoners in your dungeons and mothers are wondering where the sons are, where? In Al-Hayer being shunned and shredded/Plus you are buying up tons of weapons/For decades, you have put the guns to Yemen/Put your tanks in Bahrain to continue the most glum regression/And shoot tear gas and dum-dums into young protesters/Joblessness and poverty reign/’Cause hatred of the Shi3a is the only thing that clicks in your Wa77abi brains/With bloody cries, we remember May 1, 1925, this is the spirit of Baqi/This loud joint is the proud voice for the fearless in Qatif/

Deconstructing Mecca and Medina into Westernized cities/Any dissent about it is rectified quickly/Lady Khadjia’s home was maimed and changed to a toilet/How can we forget every US base, now the anger is boiling/Doing business with the Mossad in front of our eyes, you’re gangsters and poison/Look at what you cranks are destroying/Every last drop of the Prophet’s heritage and the Prophet’s legacy/Sectarian fanatics, from Iraq to Syria you prop up terrorists while you profit heavily/You don’t represent the Ummah so please just stop the rhetoric you are not a friend of we/You may have got Americans who have got hegemony/But we got ALLAH, and even when He’s plotting a demise yo, the plot’s benevolent ‘cause His plots are heavenly/I know all about your princes, though they are illiterate, a bit dumb/They are still degenerate, they are into pornography, little kids and strip clubs/Salman, Bandar and Faisal, the entire lot of ‘em are iniquitous and rich scum/ That bow at the feet of the Zionists, which you still shamefully deny/You view the downtrodden as those, who were made to be deprived/But they are gonna be your end, you best understand that this aggravated vagrancy will rise/Starting with the women, salute to all the sisters with the bravery to drive/

Of the Two Holy Mosques, you are not the custodians/Your religious police, they are proper draconian/Your interpretation of Islam is increasing murder rates, it is 7aram, full of rot and erroneous/Gave Hajj security to G4S, you’re puke on a diseased floor, yes you let the friends of the Israelis have the watch, it’s felonious/Tzipi Livni openly brags about your interests and the language that you sing is theirs/Michael Oren too, it is quite deplorable that the message from your king is clear/The peaceful civilian nuclear program of Iran is a threat to the region/But not Zionist nukes, I would say you’re mentally disconnected or dreaming if I didn’t know you wretches were demons/The House of Saud needs to die, or at the least we wanna see this house arrested/Gamal Abdel Nasser warned us more than forty years ago about its methods/Said you would send an Arab force to Leb to uproot the Party of ALLAH/But noted that you needed imperial air power to help, ‘cause the strength of your army is a con/Sayyed Hassan Nasrallah has more dignity, in his baby toe than you will ever possess/He gives us hope and belief in liberation while you embezzle our breath/A century of treachery with Zionism and it’s so ugly when we relay/Dare bark about supporting the Palestinian cause while you give money to the PA/Had no problem with the British giving away the Holy Land to the poor Jews/A dirty plot, that’s what you called them in a letter to Percy Cox, all you are surely nothing but pure tools/Cowards left Palestine buried/But Iraqi intelligence revealed the how and why, ready?/Royals are foiled, they’re about to get their shallow lies levied/Kingdom is descended from the Kabbalistic followers of ghoulish Jewish fake messiah Shabbetai Zevi/ 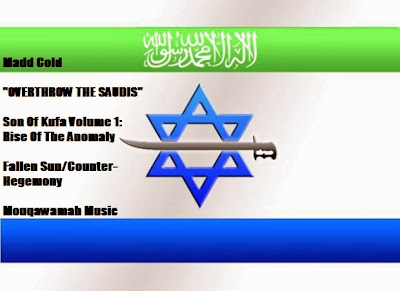 Most of the gunmen who carried out a brazen attack against the Yemeni Ministry of Defense that killed 56 people were Saudi nationals, said Yemeni investigators on Saturday morning.

The Yemeni investigator’s preliminary report about the attack supports previous claims of responsibility by Al-Qaeda in the Arabian Peninsula (AQAP), which was established through the merging of Saudi and Jemeni ”jihadist” networks, and which according to experts is operating in liaison with the Saudi Interior Ministry and Saudi Arabia’s Intelligence Service.

On Friday, the AQAP claimed responsibility for the attack, justifying it by stressing the claim that the Defense Ministry’s complex hosted US personnel which are responsible for the drone strikes against Al-Qaeda militants in Yemen.

Considering that the AQAP operates in liaison with Saudi intelligence however, it is noteworthy that the Yemeni government, including its Defense Minister, recently and repeatedly have demanded that the USA stops its drone attacks, stressing that the attacks kill unarmed civilians, create more militants than they kill, and are counterproductive with regards to the security operations carried out by the military and police of Yemen.

The investigators report that the attack on the Defense Ministry in Yemen’s capital Sanaa was initiated when a suicide bomber rammed a vehicle into the gate of the Ministry’s complex, penetrating the gate and exploding the explosives-laden vehicle a split second later. The gunmen, dressed in military fatigues, then used the ensuing panic and confusion to storm the Ministry.

The brazen daylight attack in the middle of the sprawling capital has cost 56 lives. After Yemeni military forces regained control over the ministry, they said, that they had recovered the bodies of twelve of the attackers who were slain during the attack.

It was a hospital within the Ministry compound that took the brunt of the attack. Among the 56 dead are medics from Germany, India, the Philippines, and Vietnam, as well as civilian and military patients, said a spokesperson for Yemen’s Supreme Security Committee.

The Yemeni analyst and expert in Al-Qaeda affairs, Saed al-Jamhi, said that the attack reflects “the level of the network’s penetration into security and military services” showing that the militants have “access to high level information”. Also al-Jamhi’s assessment supports other expert assessments, according to which the AQAP is operating in liaison with Saudi intelligence services and thus has access to high-level intelligence.