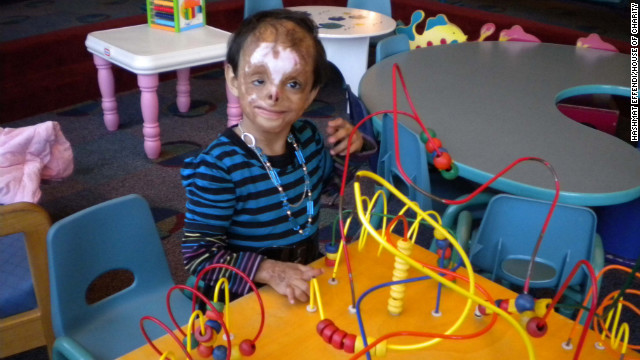 (CNN) — She has eyelashes but no eyebrows. She has all her fingers but is missing four nails. Her skin is so taut now that she can no longer frown.
But she can still smile.
Her face tells a story of suffering. Her name, Shakira, tells a story of a new journey.
Shakira means thankful.
Last week, 4-year-old Shakira arrived in the United States for what her caretaker, Hashmat Effendi, hopes will be the start of the rest of her life.
Shakira, believed burned in a U.S. drone strike in Pakistan, will undergo reconstructive surgery in January.
She will never look fully normal, but Effendi hopes the surgery will make it easier for Shakira to grow older and help others see what Effendi has seen all along: an effervescent bundle of love.
In 2009, Effendi was on a medical mission with Texas-based House of Charity in Pakistan’s Swat Valley. The region’s natural beauty was once compared to Switzerland’s, but by then it was a Taliban-infested area rife with violence.
One of the doctors found three little girls left in a trash bin. They’d suffered horrific injuries.
“Who are they?” the doctor asked.
Nobody knew.
Where were their parents? Where were they from?
All anyone could say is that there had been a U.S. drone attack. The girls were likely hurt in the strike.
The doctor, who was traveling with House of Charity, took them back with him. They were in grave condition. Two of the girls died, but the littlest one had a chance of making it if she were treated right away.
She was only a year old, Effendi guessed, but small for her age. She was skinny. Dirty. Very bloody. She had fresh burns all over her face, her scalp and on her arms.
Effendi began searching for the little girl’s family. She needed their consent before doctors operated on her. But when no one stepped forward, doctors proceeded anyway to treat the burns. Otherwise, they would have to amputate her arm. Otherwise, she might not survive.
Effendi named her Shakira.
“Life,” she said, “was a gift for her.”
Effendi continued to look for relatives, even scattered posters of Shakira everywhere and solicited the help of the Pakistani army and a government official. But still, no one claimed her.
Shakira was finally taken to Shalimar Hospital in Lahore, where she spent the next three years in a charity ward. Until last week.
Effendi was finally able to bring Shakira back to Houston, where Effendi lives.
When the Qatar Airways flight landed, Shakira turned to Effendi, whom she calls Mummy.
“Are we in America?” she asked.
“Yes,” Effendi replied.
Shakira put her hands together and clapped.
On the plane, Shakira had learned to count from 1 to 27 in English. It was a good start, Effendi thought.
House of Charity has helped thousands of children with congenital birth defects or those who have been disfigured in war, but Shakira was special.
Effendi raised three sons, who are grown. Her house once again filled with the mirth of a youngster.
“She’s like my tail,” Effendi said. “She follows me around all day.”
She took Shakira to McDonald’s. Shakira gobbled up chicken nuggets. She learned that in America, chips were called French fries and tomato sauce was ketchup.
Effendi was ironing her clothes Tuesday when Shakira ran up to her.
“Mummy, do you love me?” she asked. “How much?”
“This much,” Effendi said, gesturing.
Shakira ran into the bathroom, stood in front of the mirror and started screaming.
It was then that Effendi realized Shakira was overwhelmed.
She had gone that day to meet her doctor, Robert McCauley, at the Shriners Hospital for Children in Galveston. He volunteered to do the reconstructive surgery.
Shakira arrived in a turquoise striped dress, black leggings and white lacy socks. She wore beads around her neck and a big pink ring that House of Charity volunteer Larry Maxwell gave her. She called him “Nana,” the Urdu word for grandfather.
At the hospital, Shakira touched McCauley’s coat buttons; the nurse’s stethoscope. She referred to McCauley as her doctor and understood as best a child could that he was trying to make her well.
“It’s not easy and it’s not a single-day procedure,” McCauley said about the surgery. He will start January 16 with her right hand.
He will never be able to give her eyebrows or restore the missing nails on four of her fingers. Sometimes, when Shakira eats spicy food, her flesh feels raw and irritated. She will have to always be careful about that.
He will never be able to fix the severe discoloration on her forehead. But he hopes to reconstruct her nose, fix her eyes.
Shakira took it all in stride at the hospital. But it was that sense of belonging and being loved that was alien for her, Effendi realized. It was overwhelming.
“She needs security,” Effendi said. “Yesterday was a very emotional day for her.”
Effendi had been working with children for 25 years. But Shakira was teaching her new things.
Effendi hopes Shakira will be adopted by a family in the United States. It would be unfair, she said, to send Shakira back to Pakistan. She has no one there.
For now, Shakira will adjust to life in America in Effendi’s home.
Effendi may never know where Shakira came from or who claimed her as a daughter.
But she knows she was able to give Shakira new life — and a name that could not have been more fitting.