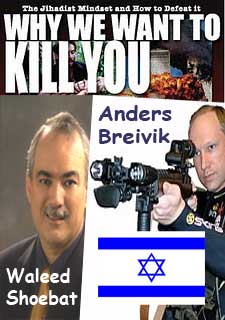 It turns out that Anders Behring Breivik’s biggest inspiration is none other than my old buddy: the pathological liar and professional Islamophobe, Waleed Shoebat. (Check out my debate with Shoebat here; read my parody of Shoebat here.)  -Kevin Barrett

The U.S. government has strongly denounced the recent massacre by a right-wing extremist in Norway, which killed at least 76 people.  But at the same time, sectors of the U.S. government have paid an anti-Muslim activist who helped fuel Anders Behring Breivik’s twisted ideology.  Breivik has admitted to being behind the massacre in Norway.

Walid Shoebat, a “terrorism expert” with a dubious background who was paid by the U.S. government to train law enforcement in counterterrorism, is frequently cited in the manifesto of Anders Behring Breivik, the alleged right-wing terrorist who is accused of killing more than 90 people in Oslo last week. Brevik cites Shoebat more than 15 times.

As I reported here, Shoebat, the subject of a recent CNN report that debunks his purported life story as a former Palestinian terrorist, rakes in U.S. taxpayer cash.

At a similar counter-terrorism event held last year in Las Vegas, Shoebat reportedly told the audience that the way to solve the threat of Islamic extremism was to “kill them…including the children.”

Shoebat is one of many anti-Muslim activists from the United States cited in Breivik’s online manifesto.  It’s a disturbing reality that Shoebat’s views on Islam are being funded with federal grants and listened to by law enforcement agencies in the U.S. The revelation that Breivik’s manifesto is laced with citations of Shoebat should be a wake-up call to the U.S. government that Shoebat, and others like him, have no place training law enforcement officers, and should certainly not be taking money from U.S. taxpayers.

Posted by Kevin Barrett at 3:18 PM