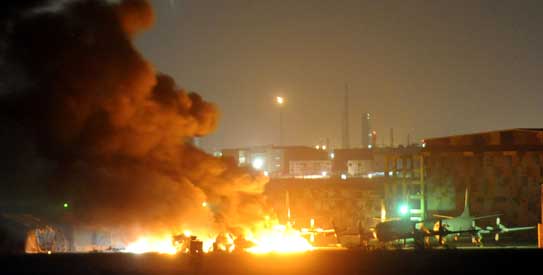 Islamabad—Information pieced together by anti-terror experts has confirmed that the May 22 attack at PNS Mehran Base in Karachi was the work of professionals and fully trained terrorists backed and supported by foreign authority and intelligence network.

Officials engaged in recollection of information from the scene of incident have learnt that at least three of the attackers appeared to be from Uzbekistan had full knowledge the area and technically updated in urban warfare.

Some officials also find the footprints of Al-Qaeda leader Saif el Adil’s role behind the May 22 attack but others do not rule out the possibility of the behind the scene role of a major intelligence network.
Eyewitnesses in the area confirmed that two or possible three of the attackers had conversation with one Urdu-speaking person who is believed to be the main leader of the gang. The exact number also remained a mystery but people at the scene claim that they saw at least six persons armed with Klashnikovs and rocket launchers at the time of attack. It was not clear if some of them managed to escape from the scene but officials preferred to remain silent on any arrest, if made from the scene. Some suspects arrested from the scene belonged to Balochistan leading to indication that Baloch insurgent groups backed by foreign intelligence networks have had a role in the attack.
The reports about use of Central Asian youths against Pakistan was no secret to regional authorities and even Pakistan Observer had reported on February 25 that Central Asian youths are being trained by foreign intelligence networks for conducting high profile attacks inside Pakistan.
What surprised the officials was the fact that terrorists had prior knowledge of the exact location of P3C orion aircraft and that they had been sent only to target the highly sophisticated aircraft that can blind Pakistan Navy from “mysterious activities” in the Arabian Sea off Pakistan. It now appears that terrorists were assigned two notorious tasks: destroy P3C Orions and take hostage foreign nationals particularly from a strategic friend of Pakistan.
The terrorists achieved their first target and then moved to their second target to take Pakistan’s foreign friends as hostages. Pakistan’s brave officials and sailors acted so swiftly and they shifted the foreign friends from the scene, engaged the terrorists and sacrificed their lives without any hesitation.
Eyewitnesses have confirmed that the terrorists had maps of the rooms of the main building, perhaps aware of the presence of “foreigners” and wanted to take as much hostages as possible but they failed to achieve their second objective.
The modus operandi of the terrorists was exactly like a secret operation conducted by commandos or Special Forces of a superior country behind the enemy line. There is little or no re-thinking that the action was designed, finaced and supported by one or possibily two enemy of Pakistan with a greater objective.
Officials are surprised to learn that several terrorist groups such as Al-Qaeda, Islamic Jihand Union (IJU), Islamic Movement of Uzbekistan (IMU), Turkestan Islamic Movement (TIP) and other groups are hitting only Pakistan and its strategic friends.
Pakistan’s top commanders agree that “Pakistan is at war” with local as well as foreign elements backed and supported from abroad.
Source Pakistan Observer