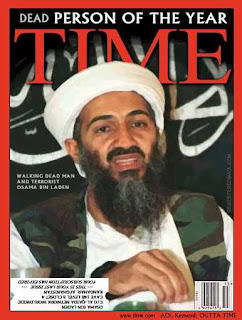 10 FACTS THAT PROVE
THE BIN LADEN FABLE
IS A CONTRIVED HOAX
May 9, 2011
Today, I am truly disgusted by the state of mind of both the American AND the Canadian public. The news sources here in Canada are putting up the same BS as the US controlled media that Osama Bin Laden died on May 1st, 2011, by the actions of American special forces. It seems that in spite of some of our best efforts in getting the absolute truth out that Bin Laden has been dead for almost 9.5 years, the media is continuing with the lies perpetrated by the American government.

Well, I figure that it is definitely time to put some final nails into the coffin of the Bin Laden fairy tale Fable perpetrated by the American government. I want to present the following article, from Paul Joseph Watson, that comes from the website: Prison Planet, at www.prisonplanet.com. It is entitled: “10 Facts That Prove The Bin Laden Fable Is A Contrived Hoax“, and gives an excellent summation of the events of this fairy tale as they unfolded, and shows in each case how they were nothing more than massive frauds. Here is that article in its entirety:

Before last Sunday’s raid, every intelligence analyst, geopolitical commentator or head of state worth their salt was on record as stating that Osama Bin Laden was already dead, and that he probably died many years ago, from veteran CIA officer Robert Baer, to former Pakistani Prime Minister Benazir Bhutto, to former FBI head of counterterrorism Dale Watson.
In addition, back in 2002 Alex Jones was told directly by two separate high level sources that Bin Laden was already dead and that his death would be announced at the most politically opportune moment.
Top US government insider Dr. Steve R. Pieczenik, a man who held numerous different influential positions under five different Presidents, serving as the Deputy Assistant Secretary of State under the Nixon, Ford and Carter, told the Alex Jones Show last week that Bin Laden died of marfan syndrome shortly after he was visited by CIA physicians at the American Hospital in Dubai in July 2001.

The official narrative of how the raid unfolded completely collapsed within days of its announcement. First there had been a 40 minute shootout, then there was no shootout and just one man was armed, first Bin Laden was armed then he was not, first Bin Laden used his wife as a human shield and then he did not.
First the compound was described as a “$1 million dollar mansion” then it turned out to be a rubbish-strewn dilapidated compound that was worth less than a quarter of that. Almost every single aspect of the official narrative has changed since Obama first described the raid last Sunday as the White House struggles to keep its story straight.

The alleged body of Bin Laden was hastily dumped in the sea to prevent any proper procedure of identification.
The White House claimed this was in accordance with normal Islamic burial rituals; however numerous Muslim scholars all over the globe disputed this claim, pointing out that Muslims can only be buried at sea if they die at sea. While the White House claimed that Bin Laden’s death on May 1st was proven by DNA and facial recognition evidence, such proof was never released for public scrutiny and the Obama administration refused to release photos of Bin Laden’s dead body, suggesting a cover-up.

Despite the fact that the White House released “situation room” photos which purported to show Barack Obama, Hillary Clinton, Joe Biden and the rest of Obama’s security staff watching the raid which killed Bin Laden live, it was later admitted by CIA director Leon Panetta that Obama could not have seen the raid because the live feed was cut off before the Navy SEALS entered the compound.
The photos were described by many as having “historical significance,” forming a “captivating” record of Obama’s greatest success and being the “defining moment” of his Presidency. One image showed Hillary Clinton with her hand over her mouth as if witnessing an anxious or crucial moment in the raid. Media reports at the time claimed that the photos represented the moment when “The leader of the free world saw the terror chief shot in the left eye.”
However, the photos were staged as a PR stunt for public consumption, nobody in the photos ever saw Bin Laden killed live, nor did they see the Navy SEALS even enter the compound.

As even mainstream journalists began to cast suspicion on the official narrative behind the raid, the media reported that Al-Qaeda itself had confirmed every detail of Obama’s address the the nation.
However, the conduit for such a claim was in fact an organization called SITE, which is a notorious Pentagon propaganda front run by the daughter of an Israeli spy that has been caught on numerous occasions releasing fake cartoonish “Al-Qaeda” videos at the most politically expedient times for both the Bush and Obama administrations.
The SITE organization is nothing more than a contractor for the U.S. government, receiving some $500,000 a year annually from Uncle Sam, and yet the corporate media instantly swallowed and regurgitated the claim that “Al-Qaeda” had confirmed the official story after SITE directed them to an anonymous posting on an Islamic website.

Almost every single neighbor that lived near the alleged Bin Laden compound in Abbottabad that was interviewed by news reporters said with absolute certainty that they had never seen Bin Laden and that they knew of no evidence whatsoever to suggest he lived there.
Since the town is a staging ground for the Pakistani military, which has a training facility situated virtually a stone’s throw away from the alleged Bin Laden compound, residents were required to show ID when they moved into the area.
Pakistani troops and anti-terror police in the town refused to confirm that Bin Laden had lived in the house. Barack Obama himself admitted to 60 Minutes that the White House was only 55/45 sure that Osama lived there before the raid and this uncertainty prompted concerns that the US Navy SEALS sent in could have targeted a “prince from Dubai” or some other individual that was not Bin Laden.

The videos released by the White House this past weekend which purport to show Osama Bin Laden making Al-Qaeda tapes in October-November 2010 are almost identical to footage first released by Pentagon front group SITE nearly four years ago. Remember, a May 2010 Washington Post story reported how the CIA had admitted to making fake Bin Laden videos.
Despite the White House’s insistence that the footage of Bin Laden is recent, he looks younger and healthier than tapes released almost a decade ago, having apparently dyed his beard black.
A separate video that purports to show Bin Laden in his compound flicking through satellite TV channels depicts a much older looking man with a gray beard. Analysts have pointed out that the man has different shaped ears to real Osama pictures from back in 2001.
A doctor has also pointed out the fact that the man in the tapes released Saturday has no problem moving his left arm, whereas video from 2001 clearly illustrates how Bin Laden was unable to move his left upper extremity because of a permanent injury probably related to damage to the peripheral nerves. Why the cameraman would film the back of Bin Laden’s head as he watches television is also dubious. Residents in the town of Abbottabad claim the man in the “television” video is not Osama, with one individual claiming that the man labeled by the White House as being Bin Laden is actually his neighbor, a man named Akhbar Han.

Despite the fact that numerous neo-cons came out on the days after the alleged raid to erroneously assert that torturing terror suspects at Guantanamo Bay led to the discovery of Bin Laden, Osama himself, the supposed world’s most wanted terrorist and a treasure trove of terror information, despite the fact that he was unarmed, was not taken in for questioning, he was instantly shot in the head according to the official narrative.

The US government has been caught on several occasions within the past decade staging military operations for the purposes of generating contrived, pro-war sentiment amongst the American public.
Both the “rescue” of Jessica Lynch and the death of Pat Tillman were complete fables, scripted and staged at complete odds with the truth and unleashed on Americans as part of a psychological warfare offensive to elicit support for the war on terror, almost identical to what we’re seeing now with the Bin Laden sideshow.
Given the fact that the US government has been caught red-handed scripting tales of pure fiction in order to justify the war on terror, notably in the cases of Jessica Lynch and Pat Tillman, why on earth should we believe them now?

Despite the fact that Obama announced last Sunday on live television that the world was now “safer” because Bin Laden was dead, his administration, with the aid of the fear mongering mass media, instantly seized upon the situation to terrify Americans into being afraid of imminent “reprisal” terror attacks inside the United States, later claiming that Bin Laden had formulated an “aspirational rather than operational” plan to derail US trains that travel over 500mph, although no trains in the US can actually travel at such speeds.
This led “terror experts” to salivate over how TSA agents were now needed in shopping malls to stick their hands down Americans’ pants, while New York Senator Chuckie Schumer called for the no fly list to be expanded to trains and subways. Obama hurried to ground zero for a photo op as he desperately tried to use the Bin Laden hoax to whip up phony patriotism as a means of boosting his flagging poll numbers.
Others, like Democrat Bill Richardson, exploited the situation to try and push through policies that had no connection to Bin Laden or terrorism at all, like cap and trade.

The haste with which the whole Bin Laden fable was exploited for political points scoring and as a psychological ploy to return Americans to a post-9/11 state of intellectual castration was painfully transparent, clearly suggesting that the entire farce was planned well in advance to achieve precisely those goals in the run up to 2012.
*********************
Paul Joseph Watson is the editor and writer for Prison Planet.com. He is the author of Order Out Of Chaos. Watson is also a regular fill-in host for The Alex Jones Show.

NTS Notes: Readers, it is so obvious by now that this Osama Bin Laden fable was created to boost the failing Obama Administration. A friend of mine pointed out that the President`s approval rating shot up several points as a result of this bogus attack.

It is apparent that this liar President is definitely trying to get re-elected in 2012. I need to ask:
Is the American public really this gullible?

By the information presented in the last few points in this article, it is apparent that these criminals will attempt to extend their TSA criminality to the point that people will now be groped on buses, trains, and even in shopping malls! Again, what is the matter with the American public that they will allow this to happen?

I said it before, and I am saying it again… It does appear that America is now a lost cause. If the American public are this stupid that they will swallow the lies put out by their crooked government, then they will get exactly what they deserve… Loss of Freedom and Liberty!

Wake up America before it is too late!