Members of the Saudi royal family have voiced their displeasure with the Obama administration’s approach to the Middle East through private channels and recently in public as well. None of them puts it quite like HRH Prince Alwaleed bin Talal bin Abdulaziz Alsaud.

One of some three-dozen living grandsons of the first Saudi King Abdulaziz, this prince is a prominent but atypical royal. His investment company made him the Arab world’s richest businessman. He strikes a modern image for a Saudi, employing female aides and jet-setting on a private Boeing 747. He’s at ease with Western media.

Passing through New York earlier this week, Mr. Alwaleed, who is 58, sits down with the Journal editorial board between a couple of television appearances. He wears a blue suit, shirt and tie. These days, his bouffant widow’s peak has more salt than pepper. The prince holds no important government post in Saudi Arabia, but it’s hard to shake the impression that here is the uncensored id of the reserved House of Saud.

“America is shooting itself in the foot,” he says. “Saudi Arabia and me, myself, we love the United States. But what’s happening right now here, from Republicans and Democrats, is just not helping the image of the United States and is making this perception that America is going down a reality.” 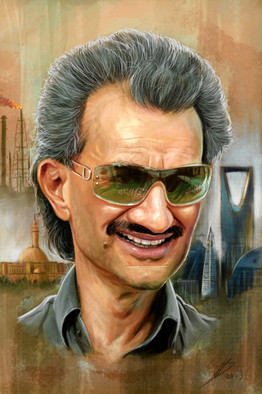 Mr. Alwaleed struggles to understand how a wing of the GOP can shut down the government and threaten a debt default. His company has a significant economic bet on the U.S. through Twitter and New York’s Plaza Hotel, among many holdings. As for President Obama, his second term is “going downhill completely,” he says, adding on several occasions the disclaimer that “this is the impression I have in Saudi Arabia.” But it’s clear that the Saudis believe that the president’s political troubles shape his actions in their region.

Mr. Obama’s recent Hamlet act on Syria surprised and infuriated Riyadh. After the worst chemical-weapons atrocity of the war, the American leader heeded long-standing calls for military intervention, then hedged by asking for congressional approval, then nixed airstrikes in favor of a disarmament pact with Syria’s Bashar Assad. The civil war continued—with Assad and his Iranian allies lately taking the upper hand. Mr. Alwaleed says of Mr. Obama: “He blinked.”

Then came the autumn outreach to Iran’s new president, Hasan Rouhani, leading to this week’s negotiations in Geneva on Iran’s nuclear program. Another “impression” from the prince: President Obama’s falling popularity explains his “overeagerness” for an agreement made “very fast to at least put one issue in foreign policy aside” because “he’s wounded now across the board.” The Saudis view the Shiite theocracy in Tehran as the biggest threat to the Sunni Arab world.

Though the American public soured on Saudi Arabia after the 9/11 terror attacks were organized by a Saudi, Washington and Riyadh remained on good terms. But now relations are strained, perhaps the worst breach since the 1980s fight over the proposed sale of U.S. Awacs planes to the kingdom. A frequent Saudi complaint these days is that this White House doesn’t listen to them or reveal its true intentions.

“Frankly speaking,” Mr. Alwaleed says, during the first Obama term “his communication was almost nil,” aside from a brief visit with King Abdullah in Riyadh in 2009. Ronald Reagan and every president since cultivated personal ties, but “Obama is very cold because he is very, very immersed” in domestic policy.

Hillary Clinton, who logged 956,733 air miles in four years at the State Department, came to Saudi Arabia once. “She was not really tackling the Middle East,” the prince says. In less than a year at Foggy Bottom, John Kerry has called on the Saudis three times, and the royals appreciate his engagement.

The deal on offer in Geneva this week relaxes sanctions on Iran in exchange for promises to slow work on parts of the nuclear program. The Saudis and Israelis have both pre-emptively condemned any agreement that doesn’t dismantle Iran’s ability to enrich uranium and build a bomb. This one won’t. Mr. Alwaleed says the Saudis are trying to “put maximum pressure now on the United States not to succumb to the president of Iran’s soft talk.”

The prince stops short of endorsing an Israeli military strike on Iran, but in the same breath says he thinks a military option to “neutralize” Iran’s nuclear potential is preferable to a bad diplomatic deal.

If Iran does go nuclear, Saudi Arabia may not be far behind. It has options. Riyadh underwrote Pakistan’s atomic-bomb program and keeps the country’s economy afloat with its largess. The “arrangement with Pakistan is too strong” to dismiss an almost overnight nuclearization of the Arab peninsula with their help, Mr. Alwaleed suggests. Pakistani Prime Minister Nawaz Sharif, who returned to power in June, lived in Saudi exile after a 1999 military coup. “Nawaz Sharif, specifically, is very much Saudi Arabia’s man in Pakistan,” Mr. Alwaleed says.

The Obama administration’s disengagement from the Middle East was implicit in the withdrawal of all U.S. troops from Iraq and the refusal to arm Syria’s rebels. Susan Rice, the national security adviser, was explicit last month in an interview with the New York Times that the White House had adopted a new policy to scale back America’s involvement: “We can’t just be consumed 24/7 by one region, important as it is.”

As the U.S. distanced itself from Egypt after July’s military coup, Russia has offered Cairo arms and support. The Chinese are in no position or mood to take the baton of regional enforcer from the U.S., which polices the Strait of Hormuz to keep it open for oil tankers and protects friendly Gulf states. But the Saudis are getting along better by the day with Beijing, says Mr. Alwaleed, adding that “China is very eager to fill any vacuum that the United States may create.” Bluff, threat or prediction? Check back in a few years.

Another feature of the Obama era is the regional freelancing by countries that previously deferred to Washington. Defying the U.S., the Saudis in 2011 sent soldiers over the causeway into Bahrain to protect the island’s Sunni king from street demonstrations by members of the Shiite majority pressing for greater political rights. The Saudi royals also blamed Washington for abandoning an old American friend in Egypt’s President Hosni Mubarak, who was deposed in February 2011. For the record, Mr. Alwaleed thinks the Mubarak presidency was unsalvageable.

From the start of the Syrian conflict, Saudi and Qatari support flowed to the anti-Assad rebels. Mr. Obama held back before permitting small-arms deliveries in recent months. But Assad’s chemical attacks and an emergency lifeline of Iranian fighters, money and arms have turned the tide of the war. Mr. Alwaleed says Riyadh has upped its weapons supplies and training for the rebels but can’t do as much as a superpower.

As the West stood aside, extremist factions in the rebel coalition strengthened and turned on each other. Some are linked to al Qaeda, “really savages, like in Afghanistan,” says Mr. Alwaleed. Of course, Gulf money and weapons also went to them, as it goes to their brethren in Afghanistan and Pakistan today—but that’s left unsaid.

Educated in the U.S., Mr. Alwaleed has said he started off in 1979 with a $30,000 loan from his father to create Kingdom Holding Co., a diversified-investment firm. The prince denies persistent rumors that the company is an investment front for other Saudi royals who guard their anonymity.

Mr. Alwaleed came to business prominence in the U.S. with a $590 million cash infusion into Citicorp in 1991. Later that decade, he took a 5% stake in News Corp that is now 7%. He’s the third-largest shareholder in the company that publishes The Wall Street Journal.

When Forbes this spring put him 26th on its annual list of the world’s richest, with a fortune estimated at $20 billion, Mr. Alwaleed said the magazine shortchanged him, and he threatened to sue. He visibly relishes the perks of princely billionairehood.

Some false steps have hurt his reputation. Days after 9/11, Mr. Alwaleed donated $10 million to New York City accompanied by a statement that the U.S. government “should re-examine its policies in the Middle East and adopt a more balanced stance toward the Palestinian cause.” Mayor Rudy Guliani returned the check.

The House of Saud’s concern about the U.S. these days isn’t merely about foreign policy. The American energy revolution is also a potential threat. Driven by technological advances in shale exploration, the U.S. will pass Saudi Arabia and Russia as the world’s top oil producer by 2015, the International Energy Agency said this month. Mr. Alwaleed hasn’t looked at possible investments in shale—at least “not yet.”

As for the Saudis’ own bottom line: With America’s reliance on imported oil declining, he warned his government a few months ago about the kingdom’s unhealthy dependence on oil-export revenues. But Mr. Alwaleed also says the world will always demand Saudi Arabia’s cheaply drilled crude.

The political upheavals in Tunisia and Egypt that began almost three years ago sent a tremble through the House of Saud. King Abdullah, who turns 90 next year, moved to head off discontent by pouring more than $130 billion into jobs and housing for young Saudis. The strategy eased any pressure to open up the absolutist monarchy. Mr. Alwaleed takes pains to mention his support for reform and the gradual modernization of Saudi Arabia, including the right of women to drive.

Concerns about the health of King Abdullah and an uncertain succession hang heavy over Saudi Arabia’s future. Mr. Alwaleed’s father sits on an Allegiance Council created early in King Abdullah’s reign to formalize the selection of monarchs. This new system, he repeats more than once, is “untested.” Mr. Alwaleed’s mixed Lebanese heritage through his mother, among other reasons, virtually rules him out from consideration.

America’s current arm’s-length approach to the region presents an opening as well as a danger for the Saudis. After July’s coup in Egypt, Riyadh gave the new military-backed government $5 billion to tide the country’s economy over for a few months. The rise of Egypt’s Muslim Brotherhood and demands for popular democracy were unwelcome in Riyadh. Mr. Alwaleed notes that Saudi diplomacy also carries a fat checkbook in Jordan, Palestine and Yemen, which are in his words “under our hegemony.”

Mr. Kaminski is a member of the Journal’s editorial board.