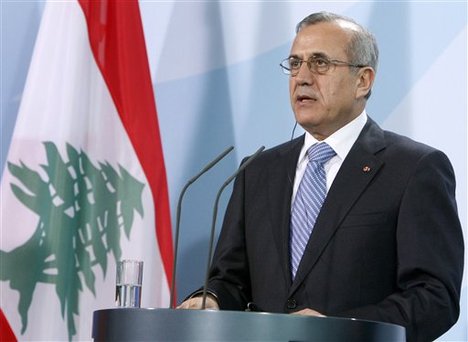 Lebanese President Michel Suleiman condemned the explosion which occurred on Thursday in the Dahiyeh quarter in southern Beirut. According to him, the blast had the fingerprints of Israel, and its purpose is to destabilize Lebanon.

Lebanese Prime Minister elect Tamam Salam told Lebanese media that Israel has the most to gain out of the blast. He added that this was a cowardly act, meant to harm Lebanon.

Lebanon Interior Minister Marwan Charbel in a television also pointed blame at Israel, saying that the blast may have been in retaliation to last week’s explosion near the Israel-Lebanon border, which Hassan Nasrallah said Wednesday was perpetrated by Hezbollah.

Earlier Thursday, Druze member of the Lebanese parliament, Walid Jumblatt, who heads the Progressive Socialist Party, told the Hezbollah affiliated al-Mayadeen TV channel: “I blame Israel for the Beirut blast. Israel wants to avenge itself on Lebanon for its defeat in the Second Lebanon War .”

A Hezbollah parliament member told the al-Manar network: “Those who conspired against Hezbollah during the Second Lebanon War are letting terror inside Lebanon.”

Shiite-Suni tensions in Lebanon have reached a boiling point, especially since the Shiite Hezbollah increased its involvement in the Syrian conflict, backing President Bashar Assad.

At least 20 people were killed and 120 were injured in an explosion that struck the southern Beirut stronghold of Lebanon’s militant Hezbollah group on Thursday, a security source said.

Despite allegations pertaining to Israel’s responsibility in the attack, Lebanese media outlets on Thursday aired a video posted online in which a group dubbed “Aisha the Mother of Believers Brigades for Foreign Missions” claimed responsibility for the attack.

In the video, three masked men are seen with a sign behind them reading “there is no God but Allah.”

Two of them are seen toting guns. The video’s authenticity has yet to be verified.

” We, The Aisha Mother of Believers Brigades for foreign missions, send you Hassan Nasrallah and your party our second resonant, strong message after having sent you our first message and you still do not understand,” a speaker says in the video.

The speaker also accused Hezbollah leader Hassan Nasrallah of serving Iran and Israel, and added: “We address a message to our brothers and families in Lebanon: We ask you to stay away from all of Iran’s colonies inside and outside Beirut.”

According to the speaker, the group performed attack against Hezbollah before.